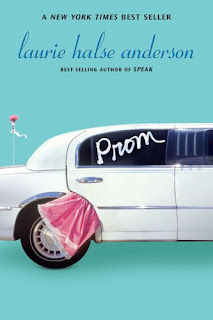 The Story According to Goodreads

"High school senior Ashley Hannigan doesn't care about prom, but she's the exception. It's pretty much the only good thing at her urban Philadelphia high school, and everyone plans to make the most of it—especially Ash's best friend, Natalia, who's the head of the committee. Then the faculty advisor is busted for taking the prom money, and Ash suddenly finds herself roped into putting together a gala dance out of absolutely nada. But she has help—from her large and loving (if exasperating!) family, from Nat's eccentric grandmother, from her fellow classmates. And in putting the prom together, Ash learns that she has choices about her life after high school."

This story was so laugh-out-loud funny, I got weird looks even in the house.  I was able to finish this book in one sitting as it was fast-paced, well-written, and draws you into the story itself you feel like you're part of it.  Laurie Halse Anderson has been known for her serious, strong, and powerful writing as demonstrated on Speak and Wintergirls, and her book Forge is one of the 2011 candidates for the John Newbery Medal.  I cannot really imagine her writing something as light as Prom, and yet, when I read it, I do believe Anderson is capable of creating such a fun read.  Although telling a story about typical teenage dilemma, hiding behind the surface is a deep perspective on identity, friendship, family, and relationships.
Almost a modern Cinderella story, this story assembles an interesting mix of characters:  Ashley herself is pretty witty and cool.  You can see her transformation throughout the book from an irresponsible girl who only cared about her boyfriend and having a terrific future with him without thinking about how to achieve that future to a young woman who knows what to do, how to deal, and what she wants out of life.  Her friends are a cool bunch of girls, very down-to-earth and witty - the kind of girls I would love to hang out with in high school.  Her family and the rest of the school round up the funny, endearing, and quirky cast that is Prom.  Each character is drawn vividly, with individual issues and strengths, and you can relate with each of them.  Their dialogue is crisp and distinguishable, and so is the narration from Ashley's point of view.  The voice is solid and accurate for Ashley's personality and transformation.
As for the writing, it was highly convincing and appealing, that even the seemingly shallowest of conflicts - not being able to go to prom - is highly emphasized that the reader could feel the intensity of the problem.  Although actually superficial, the conflicts are raised in a way that makes the reader sympathize with what is happening, to feel for the characters.  Because this is a book for teenagers, an adult might dismiss this as a superficial teenage novel; however, reading this book, you cannot judge this as trivial or insignificant to serious teen-related matters of current times because this is a foundation of that subject.  Ashley has no idea about her strengths or her capabilities and therefore, feels inferior which results to unreliability and irresponsible behavior.  However, once she gets past that and discovers self-awareness, she decides to take control of her life and steer it into a remarkably different and better route than what she has been planning for herself.  If teenagers were even only half as self-aware and empowered as Ashley was by the ending, they would also be able to make better choices and work for their goals.  This book is not just about the prom - it's about encouraging a person to acknowledge who and what he/she really is, accepting him/herself, and recognizing his/her strengths and capabilities in order to effectively mold his/her life the way it should be.  And that, in my opinion, is what Anderson writes mostly in her other more serious books.  So yes, I can now imagine her really writing this book.
And by the way, I loved what was written in the About the Author section:  "...The night of her senior prom, she was shoveling manure on a pig farm in Denmark..."   As for me, I did not go to prom.  I was busy reading.