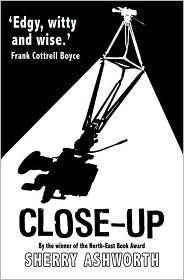 I like watching movies.  I even watch movies based on books I've read because I wanted to see how it would play out on the big screen.  But to say that I am dead crazy about movies is a bit of an exaggeration.  The same could not be said however, for Jimmy Keane.  He's a genuine film buff - he even thinks in frames!  He does this to block stressful stuff at home.  He's never known his own father and he has a somewhat difficult relationship with his mother.  Then one day, a stranger introduces himself as Jimmy's father, and Jimmy's life turns upside down.  Suddenly, he is the center of his parent's attention, suddenly, somebody cares.  Liz, his friend, is suspicious of Jimmy's father, and a startling revelation will make Jimmy choose:  His father, or everything he holds dear?
I thought this book was just your average teen read but I was sorely wrong.  It turned out to be a gripping thriller, very intriguing.  I loved the plot as it was very realistic, totally believable.  Even the characters were very real, the issues very current and spot on.  I liked how the author creatively turned Jimmy's description of his mindset into vivid scenes cut into frames.  Jimmy is a film buff who enjoys thinking like he's directing a film - and his voice and the nuances of his descriptions were so apt and detailed and very genuine.  The author has definitely used imagination and intelligence to create such convincing narration.  The story is narrated alternately between Jimmy's point of view and Liz's through her diary.  Although alternating, the voice is seamless, but very distinguishable.  The writing was snappy and crackling with developments, it's totally engaging and fun to read.  The dialogue was equally thrilling as it was solid, crisp, and tailored to fit each character's personality.
However, I must say that Liz was my favorite character.  She reminded me of Lisbeth Salander from The Girl with the Dragon Tattoo by Stieg Larsson.  She's cool, spunky, edgy, and has a strong but caring personality.  And with her image in her head which also closely resembles the physical aspects of Lisbeth.  Jimmy is okay too, but it felt that his being a movie freak made him too square for my taste.  His personality was very limited into what was expected of him.  I mean, he thinks in frames, he doesn't have much interest in his studies, he has a rocky relationship with his mother, and predictably throws himself into his father's arms when they finally meet.  There's not an ounce of surprise in how he would react, and I was not really into what's going to happen to him - I sort of already know that - I was more into what's going to happen to the whole story.  That proved to be more thrilling and exciting to look forward to.
Although the story did turn out quite well, I just had some unanswered questions in the end, but I guess that was fine although I would have liked some closure, even if it might prove tragic, but at least everything is laid out in black and white.  But then again, maybe that would prove disastrous or cruel so I try to be content with what I got.  I also felt like it was slightly hurried towards the ending, like the author suddenly had to meet the deadline and had to cut the story short, because I thought some preparations or twists could have been included.  Nevertheless, I enjoyed reading this book and intend to read it again and again in the future.