A Dangerous Dress by Julia Holden 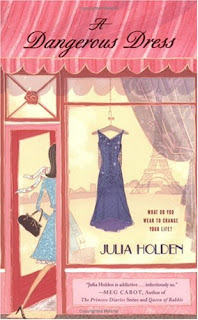 Truth be told, I would have given this book an outright 5/5 rating, if not for the fact that the story did not reveal where Jane's 'dangerous dress' came from.
So reading the synopsis, we all know that the dress was from her grandmother.  That it was totally splendid and beautiful, and that it may have emboldened her grandmother into doing some really adventurous things.  However, how her grandmother came upon this dress and the fact that it was from Paris (so her grandmother went to Paris at some point when she was younger?) remained a mystery even in the ending.  That wouldn't have been so bad because this book was meant to be about Jane and how her grandmother's dress also helped her embark on a unique adventure and find her mojo.  However, I would have loved to solve the mystery of the dress' origins since the title, A Dangerous Dress, would befit such a revelation, right?
But I can forgive that flaw if only for the fact that this book was smashing!  I know that this is really chick lit - look at the pink girly cover and the fact that most of it was set in Paris - but the writing was very strong and compelling, the simple plot becoming very complex, and the characters were so human that it felt like really reading a true story - which was how it was intended to be.  The writing was crystal, very easy to read, it was narrated through Jane's point of view and she really came off as believable and credible.  She never once sounded flat or fake, and spoke, acted, and thought her age.  There was no artificial old-age wisdom, and whatever lesson or values she learned throughout her adventure she learned her own way.
Ever since I was little, I have always been fascinated with clothes - what girl wouldn't be?  When I was younger, I used to draw really frilly and outrageous gowns and reading this book which details each clothing featured in the story brought me back to those days when I would obsess on the intricacies of a dress' design.  It was fun to read about something I'm interested in weaved in a really beautiful story set in a really beautiful backdrop - Paris.  That made me take my mind off a bit about the missing revelation about granny's dress' history.
So... I really wanted to write a long, raving review for this  book but sometimes I find it difficult to put into words just how much I liked or what exactly it was that I liked about a book.  Suffice it to say that after reading the last sentence, I totally smiled to myself and bugged my mother to read it because it was, "Wow, wow, wow, wow A-W-E-S-O-M-E!"  I really said it that way complete with a cheerleader's routine for spelling the word, and she looked at me like I just lost my mind.