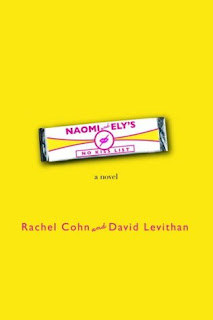 A friend of mine actually laughed at me when I read this book.  She said that I was doing this Cohn-Levithan collaborations backwards:  First, I read Dash and Lily's Book of Dares - which is the third book - then I now read Naomi and Ely's No Kiss List - the second one.  I quickly point out that I've watched Nick and Norah's Infinite Playlist, but she also quickly points out that it's not the book so it doesn't count.  I never did got to win an argument with any of my friends.
One of the highlights of writing this review is that I get to include what music played in my head while reading.  Of course, that almost happens only when I read a Levithan work, and seeing as this is one-half Levithan, music suddenly springs up in my brain:  Supposed to Be by Default.  I don't know if you've heard of it, but the tune is pretty catchy and the lyrics really good.  I'm not the best music critic/judge out there, so I can't tell if this is bad music or not, but it's perfect for this book.  I imagine it being sung by both Naomi and Ely, more by Naomi.  Because that's what they are - they're supposed to be.  Here's why:
The Gospel According to Goodreads:

"NAOMI AND ELY ARE BEST FRIENDS. Naomi loves and is in love with Ely, and Ely loves Naomi, but prefers to be in love with boys. So they create their "No Kiss List" of people neither of them is allowed to kiss. And this works fine - until Bruce. Bruce is Naomi's boyfriend, so there's no reason to put him on the List. But Ely kissed Bruce even though he is boring. The result: a rift of universal proportions and the potential end of "Naomi and Ely: the institution." Can these best friends come back together again?"

Don't you think the song sums up their story perfectly?  Because I do.  I know that the song is actually about romantic love and Naomi and Ely's love is anything but romantic - they're best friends for God's sake.  But it still did not stop me from thinking it's the perfect song because they're meant to be together, they're really meant to be friends forever, and removing sex from the equation - Naomi and Ely are the perfect couple.
Which is exactly what made me pick this one up.  Not really for the fact that one-half of this is written by my favorite author, but because I could not have found a better book about best friends at a cross roads not because they've fallen for each other - that's actually very easy - but because one is in love with the other, but the other is in love with one's boyfriend.  It's a unique take on the love triangle, with a lot of friendship elements that it's really worth reading.
Have you ever wondered how Will and Grace were before they became Will and Grace?  Well, I imagine they're almost like Naomi and Ely.   Sometimes, you have this best friend that you've decided in the early part of your life that you would marry someday.  However, the fact that your friend is gay hinders your fantasy from becoming a reality and that was the main conflict in this story.  Naomi could not seem to grasp the fact that no matter how long their No Kiss List would be, or how watertight it was, she and Ely would not be together.  Even if he did not kiss her Bruce the Second, it would still happen eventually, as I always rationalize:  All things end badly, otherwise they would not end.  What ended here was not their friendship, what ended was Naomi's immaturity.  This may be about Naomi and Ely, but while Ely also does his share of growth and maturity, it was Naomi who was focused mostly on.  Maybe that's why the title was 'Naomi and Ely' and not 'Ely and Naomi.'  Or maybe I'm the only one thinking that.  But still.
The story was written through different points of view, Naomi and Ely, the Bruces, and other friends.  It was like talking to all the characters in order to understand what happened.  It was like being a part of a big group of friends, but something happened while you were away so when you came back, you had to talk to each friend in order to get a book-worthy account of what happened to two of your closest friends - Naomi and Ely.  Also, although other readers found the different POVs confusing and pointless, I felt that it was cool to get different perspectives on what was happening, and you discover which friend made sense, which friend was worth keeping, and which friend should be dumped.  On this issue, you definitely understand what's going on and what to believe.   The writing was hip, edgy, and smart.  I like that each point of view was personalized for that character's personality.  Naomi has these symbols inserted in her chapters which is very creative and which makes the reader 'get' her.  You know, when you sometimes talk to someone and you make gestures for a certain word instead of saying it out loud?  Because of that, I suddenly associated that attitude to Naomi.  She's a gesture girl.  Gabriel, on the other hand, spoke through music tracks which shows he really loves music and it's ingrained in his personality.  The other characters' stream-of-consciousness chapters also have their own unique flavor which makes them stand out among the rest.  So I cannot imagine what other readers were saying when they said that they got confused which chapter they were reading because of the several POVs, I didn't because I recognized certain characteristics unique to a certain character.  The cast were definitely human, and I could relate to any of them, but mostly my favorite character is Gabriel.  Not just because he's hot - although it was because of that mostly - but because he seems to be very perceptive considering his role as a doorman in Naomi and Ely's apartment building.
You know what else I liked?  That the characters were already in college and around 19 and 20.  Most young adult fiction I've read were all set during high school and it's very refreshing to have a light but intelligent novel for early college kids without it turning serious, dramatic, or trashy.
Obviously, I liked this book.  A lot.  However, I am not going to compare it to Dash and Lily or even to Nick and Norah (even if I only watched it, not read it), I think that each collaboration between Cohn and Levithan are unique and awesome in their own way.  While reading this book, I've never - not even once - thought of the other two books, although a very important rest room has been frequently appearing in all three novels, each story leaving a mark on that restroom.  I was pleasantly surprised to see something from Nick and Norah on this book, and seeing that something from Nick and Norah and something from Naomi and Ely in Dash and Lily.  I'm not going to say what it is you can find, you have to find it for yourself. :-D
Finally, I'm leaving you with the song that has been playing over and over in my mind while reading this book: