Every Little Thing by Pamela Klaffke 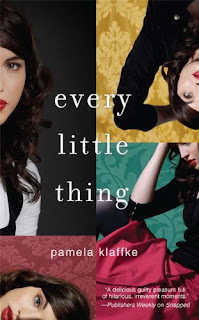 The Divine Secrets of the Ya-Ya Sisterhood.  Life on the Refrigerator Door.  The Last Time I Saw Mother.  It seems like I've been gravitating to mother-daughter books lately, and here is another one.  I received an ARC of this story from NetGalley and read and finished it in one sitting.  The book is not that long, the story itself just below 250 pages, and I guess it was okay.  Not bad, but not exactly groundbreaking.  Just enough to tide you over the next read.
To understand what I'm talking about, let me tell you a little about the story first.  This is about Mason MacDonald, the infamous magazine columnist Britt Castleman's daughter - a woman who loved to write about everything, good and bad, including everything about her daughter.  Mason grew up despising her mother's lack of sense of privacy, broadcasting all that happens to her and especially to her daughter, that the latter ended up leaving.  On Britt's death, however, Mason returns and is confronted by several problems, some of her own doing, and she discovers that though she knows she should not do the things her mother did, she might have to do some in order to cope.
I found the plot promising, which is why I really wanted to read it.  The writing is good, everything's crystal clear.  Some graphic sexual scenes, but still readable.  The dialogue is crisp, a bit of foul language but not too much that it's difficult to read.  Most of the characters are likable; however, I felt that Mason was a bit too whiny for her own good.  Why does she have to bitch about everything that happens to her?  Why does she have to blame everyone else except herself?  Since this is a bit of a coming-of-age story, yes she does grow out of her whining but still, it was too much when she did it, like she did not want to own up to her own faults and just went on doing her goth thing so she could hate the world for what she has become.  It was irritating that she had to wonder why her friends weren't paying her as much attention as she would have liked - they're grown-ups, they have jobs, of course they wouldn't have been there for her as often!  It wasn't like the world revolved around her.    This Mason gal should know that by now, she's past thirty already.  If I did not have any idea about her age I'd make her for an early twenties girl who doesn't know any better.
But that's not just where my problem with this book ends.  This story had potential, and I wouldn't have changed some parts, but those parts when she rebelled about her condition seems too made up, and even though there might be women out there who won't be afraid to stand up for whatever choices they make, what Mason does in this story is just a bit too over-the-top to be believable.  But maybe that's just me.  Maybe I'm just too square to accept the fact that what happened in the story is the norm, and I'm just too uptight to believe it.  Read this book and be the judge.
But whiny Mason and over-the-top developments aside, I enjoyed the light vibe of this book, and though it's supposed to be about how one daughter copes with her mother's death and understanding her mother, it was not too heavy that you cannot read it without having those painful chest constrictions - you still get to enjoy the book's humor and mockery, and makes this story an easy and touching read.