The Divine Secrets of the Ya-Ya Sisterhood by Rebecca Wells 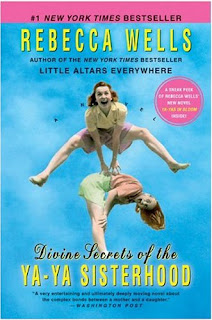 Unfortunately, I bought this for myself, albeit on sale. I thought this was going to be a fun read as it's obviously something about friendship, mothers and daughters, that type of thing. However, once I began to read, I'm afraid I could not wait to put it down.

This is a story of 40-year old Siddalee Walker whose relationship with her mother was tested when she unknowingly humiliated her mother in the papers. Siddalee began to doubt her own capacity to love, and her mother sends her a scrapbook, named "The Divine Secrets of the Ya-Ya Sisterhood." The book contained various personal mementos of her mother and her three friends that was hoped to help Siddalee in understanding her mother without putting too much emotional effort in the process.

However, although she has the scrapbook, she does not understand everything in it, and only the readers are given the opportunity to learn about each mysterious fragments through Vivi's own recollection of the past. That was my first issue with this story. If the readers are the only ones to learn about Vivi's own memories and not Siddalee, how can she be as magnanimous and understanding of her mother's flaws? How did she gain understanding in the first place? Merely sorting through another person's memorabilia does not help one become enlightened about that person's self.

Another problem with this story is that it was all too predictable. And harrowing. And long. Mother had a problematic past. Daughter could not understand mother's hardness. Daughter finds out about mother's childhood. Mother and Daughter reconcile. That's been done in a dozen other books and I thought this one would be different. Turns out, I'm wrong. In an effort to take us back to Vivi's past, we are introduced to her three other friends. We are shown their wild, adventurous lives; but theirs was a life of privilege compared to other children at that time - Vivi did suffer physical and mental abuse from her parents, but don't we all - that their characters did not appear lovable, and instead, they seemed spoiled, bratty, and insensitive.

The story tried to create too much tension in every conflict, that made it as shallow as its characters. I have been touched by some dramatic stories of abuse and learning to stand up amidst all the pain, but this one made it seem like Vivi was too caught up in her own high school life and drama that she was too busy to grow up and live up to her responsibilities as an adult, a wife, and a mother. The story provided us with an excuse as to how she reacts with such hysteria in everything that happens, and with why she drinks and smokes every chance she gets. Hardly encouraging reading.

It did not help matters any when I found out this was just a sequel. Wow, the author was not done writing yet? Obviously she's not, and obviously, she's still got a lot on her mind. The book was full to the brim of exhausting selfish details about the ya-yas I was tempted not just a few times to put it down.

On the bright side, I like the imagery and the imagination behind the story. You could visualize beautiful South in all its heat and magic, and you could almost feel the cold of Seattle. In terms of vision and powers of description, I have to hand it to the author. In the future, I hope the author could extend her powers of description and imagination not just to the scenes and settings of her stories, but to the story itself - that it not become too boringly predictable and unlovable. This book had potential, but it just could not carry the weight of all the character's idiosyncrasies and the author's exhausting ideas.

Overall I'm happy that I did not have to spend too much when I bought this book. Maybe it's just me, but I did not enjoy this story about a supposedly strong Southern woman with secrets. But if this is your cup of tea, go ahead and dive in. You might just like it.