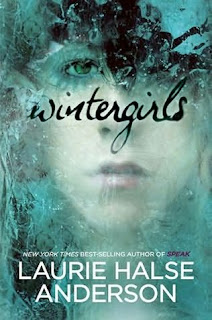 If there is anything this book is not, it's that this is about anorexia.
When I first picked up this book, I thought, Hey, something about eating disorders!  I couldn't have been more wrong.  Cassie and Lia have been best friends for a long time, and they both had a pact that they would be the skinniest girls in school.  But then due to some events, they began to drift apart.  On the night of Cassie's death, she called Lia 33 times, which the latter never answered, and have been blaming herself for her friend's death ever since.  Lia has been suffering from anorexia nervosa already.  If anything, this book is about living with an eating disorder, a fictional first-hand account from a teenager consumed by the illness.  This is a story of a girl facing a tumultuous part of her life suffering from extremely low self-esteem, self-mutilation, and anorexia, and her difficult and dangerous journey through accepting and recognizing that she has a problem and call for help.
But to condemn this book as "ghastly," "horrible read," or anything else is just not appropriate.  This is not a bad book, and I'm talking about both the plot and the way it is written.  This is a very good book in both accounts.  This book asks for empathy, not sympathy, for the sufferer and her family and friends.  This shows that behind a seemingly successful/busy/perfect parent is a nagging fear for their child's well-being, especially if that child has big issues glaring them in the face.  This book does not want you to blame Lia or Cassie - they are both victims of the false standards of society:  You have to be thin to keep your ballet solos; you have to be skinny to get a part in the play; etc.  This book does not want you to think that people, not just those with eating disorders, but everyone with mental illness or problems, are not weak and cowardly, they just have a warped coping mechanism and if anything, they need all the help they can get.
The characters in this book are very human.  I thought of Lia as a friend/sister and I love her attachment to Emma, her stepsister, her genuineness - eating disorder aside - but I hate the fact that she let anorexia take her over almost completely.  And the cutting too, that she justifies makes her feel more alive.  She is just like that girl in class always sitting at the back, trying not to be noticed, but is always judged.  Her family and friends are likewise very relatable and realistic.  As for the dialogue, it is clear but meaningful.  Crisp and to the point, and always character-appropriate.
The plot is engaging and realistic with some touches of drama, but only enough to contribute to the whole 'feel' of the story.  A lot of symbolism is also employed - the broken compass, the sea glass - metaphor for the tumult of the disorder and emotional upheaval the character is going through.  Even the cover, with a girl frozen in ice, could show that Lia is a girl frozen within herself, paralyzed by anorexia preventing her from enjoying a normal life.  Her perception is distorted by the morbid belief that thinner makes her stronger, cutting herself will make her feel more alive - she is killing herself to live.
The writing is lyrical, vivid, and poetic.  The story is well-written and well-paced, the voice of the narration at once haunting and enticing.  The story is difficult to read emotionally, but it would be more difficult to pause in your reading and put it down.  This book is that good.
I know that to most people, the holidays is not really the best time to read something that includes eating disorders, but for me this time is as good as any, to be thankful that I and my loved ones are not affected by such illness, and more understanding and empathic of people who are.  A new book to include in my favorites!