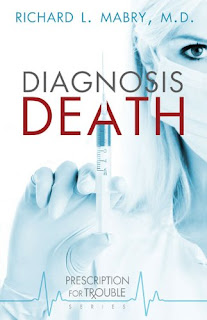 On further research, I learned that this is the third book off the Prescription for Trouble series, but it's not completely dependent on the first two books and you can read this on its own.  This digital advanced reader's copy was sent to me by NetGalley.  I did not have any expectations up front when I requested for a copy of this book, although the fact that it's got euthanasia as one of its topics got me interested but that was just it.  Reading through the first few pages got me hooked and I somehow knew this would be a really fun and intense ride.
According to Amazon.com

"When her comatose husband dies in the ICU while on life support, the whispers about Dr. Elena Gardner begin. Another death during her training puts her under suspicion. When the pattern is repeated in the hospital where she is attempting to start over, the whispers turn into a shout: “mercy killing.”

What is the dark secret that keeps Elena’s lips sealed when she should be defending herself? Despite her move to a new city, the midnight phone calls that started after her husband’s death follow Elena. Who is the woman who sobs out, “I know what you did?” What does she mean by “You’ll pay?” And what can Elena do to prevent it?

Two physicians, widowers themselves, offer support, telling Elena they know what she is going through after the death of her husband. But do they? And is it safe to trust either of them with her secret?"

This book totally blew me away!  It possessed everything I have been looking for in a thriller:  Mystery, suspense, some psychological kicks.  This could be one of the scariest thrillers out there to be released in 2011.  While reading this book, I couldn't help but think to myself, This is totally up there with Hannibal.  There aren't any gruesome murders or inconceivable torturing but the fear that each chapter conveys - the mysterious calls, the anonymous letters, all those harrowing events that haunt Elena's life is so surreal yet very realistic.  I could never begin to figure out how anyone confronted with such threats could cope, and yet in this well-written story, I think I almost could.
Euthanasia has been the topic of much debate over the years in Bio-Ethics.  In this book, it covers the legal, emotional, and psychological ramifications for the people that will survive the patient once life support is withdrawn.  The grief and the guilt caused by making that major decision to allow a loved one to die is so inconsolable and overwhelming, and this story attempts to portray all those emotions with logical and spiritual balance.
The writing is snappy, demanding, and well-paced.  You begin to read this and you do not put this down.  The voice of the narration is neutral but laced with excitement and pulls the reader deeper into the story until all questions are answered, all mysteries solved.  It did not also attempt to hold off on the suspense too much, unlike other stories that try to string the reader along until the very end to reveal every answer that turns out to be too simple or bland that it becomes an anticlimax.  But it did not, however, expose everything right away, the timing is impeccable, that once I got into some of those parts, I would try to cover the lower page with my hand just so my eyes wouldn't cheat and try to peek and see the answers.  It was exciting to solve the mystery and it was exciting to understand the mystery.
The characters are all well-rounded, well-thought of, their personalities very human and realistic.  I felt a lot of sympathy for Elena, for all her losses and misfortunes, but I was totally with her to the end.  I loved her courage and her strength, and somehow she reminded me of her mother, nothing fazes them.  As for the other characters, they are all very likable and relatable, although I would have wanted to torture some characters a bit more.  But that's just the sadist in me talking.
Overall, I could not wait for this book to be out in bookstores next year.  Even if I'd read this already, I would love to pick up a copy and read it all over again.  I would definitely recommend this book to everyone.  Watch out for this one and don't forget the date this will be published:  April 1, 2011!