I Kissed a Zombie, and I Liked It by Adam Selzer 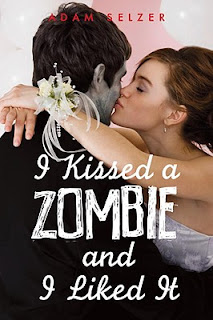 Well would you look at that, I just posted a Teaser Tuesday about this book, and now, the review's here!

I don't like paranormal fiction much, I respected Harry Potter and Lord of the Rings, but I just don't get Twilight. I did, however, loved Anne Rice's Vampire Chronicles, but only because I thought it was brash, crude, and not at all romantic. Which is, in my opinion, everything that Twilight and most other paranormal fiction out there are. I've got nothing against that type of genre, it just does not appeal to my taste, and I think I'm one of those people who can't stand the fact that the undead are not scary anymore. They're now mystical and sentimental lovers out to conquer a special human's heart. So when I saw this book, I picked it up, knowing that it would be something that will make fun of this whole new rising genre. I read the blurb, and immediately, I was hooked!

"Eighteen-year-old Algonquin "Alley" Rhodes doesn't need to watch Twilight to know what it's like to be around vampires. Her school is teeming with them - along with zombies and werewolves, of course. A few year ago, all the post-humans "came out of the coffin," and now they're just a normal part of life. But the movies don't tell the real story. Real vampires are brooding, self-absorbed jerks who run around acting all emo. That's what Alley thinks, anyway.

Then one night Alley goes to the Cage to review a local band, the Sorry Marios, for her school's blog. Alley's known for her sarcastic wit, and she can't wait to rip apart the band's set. But when a special guest singer, Doug, hits the stage, his soft, crooning voice stops her heart. He seems like a real goth, not like the lame wannabes at her high school. And for the first time, pale skin and black clothing are hot to Alley.

When she and Doug start dating, Alley's so swept off her feet she doesn't suspect anything, despite a few odd signs: he never changes clothes, his head is a funny shape, and he says practically nothing out loud. Finally, her best friends clue her in: Doug isn't just a really sincere goth. He's a zombie.

Alley knows she has to break up with Doug but soon learns that zombies are awfully hard to get rid of. And the school's vampire clique, a group as tightly knit as the Mafia, has its own plans for Alley's future. Will Alley survive her little experiment in dating the undead?"

If you are looking for an authentic zombie romantic fiction, stop in your tracks from getting this book. This is not something that will satisfy your zombie fix, nor is it something to include in those romantic paranormal romance lit out there. If anything, this is an entertaining, tongue-in-cheek, if a bit critical, parody of all things Twilight, Plants vs. Zombies, and whatever.

First off, the good things. Utilizing the author's background, this book is filled with great music, great snarky and witty jokes, and SOME really interesting characters. I would like to explain why I typed "some" that way, but I might forget that I'm only going to be talking about the good things first. I like the fact that there are no "old soul" thing going on and the teenagers all act their obnoxious, self-absorbed, naive age. The story is realistic, up until the point where the undead come in and begin their story. Then it becomes realistically unrealistic, but in a good way. The whole book starts off as a wisecracking, humor-filled take on the vampire craze and then suddenly churns out great insight, and ends with a mature, yet low-key ending. Mature in the sense that there is something to be learned here, a moral lesson if I may say so, that teens should seriously bear in mind: Yes the teenage years are quite overwhelming and unexciting at the same time, but never, ever look through your life with myopic eyes, never make hasty decisions. Otherwise, you might just turn out to be one brain-eating zombie idiot. The author never said it in those exact words, but when you read the whole novel, you'll understand. And no, there is no spoiler here.

Readers will find themselves laughing at the snarky comments Alley makes, and the jokes that the characters toss at each other. The dialogue is light, crisp, smart, and precise. Even those of Will's that sound, according to Alley, like a "German guy who just learned English from watching the BBC." It's only understandable if you find yourself commenting, "Hey that's my line!" on some of the things the characters say, because I did, and it only added to the fun I had while reading this.

Now onto the bad things: Typo, typo, typo! There aren't that many, but man, are they noticeable. Or maybe it's just me. Right now, let's go back why I typed SOME above. I like Alley and Doug and everyone, but they all seem to lack depth and perspective. But hey, this is just a fun, light story making fun of other stuff, so I guess I can forgive that. Another thing I notice is that there are a lot of questionable "answers" given in this story, and maybe the author really wanted to keep it short, but if he explored those answers, he might have done a better, if longer, rendering of the plot.

Those things said, I still can't get enough of the fun I had reading this book, and I think that's enough to forgive any flaws and provide allowances for this one. After all, I'm not really looking for an insightful view of the world. If it's a fun read you want, go get this one.