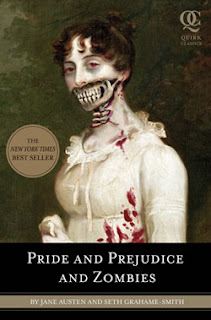 I previously said I'll be reading this but I ended up ditching it because it bored me.  Well, in between books, I tried to read a few pages and now I am done, hence this review.
At first I was really fascinated with the concept of introducing a completely bizarre story into the classics, helps stir things up and encourages a renewed interest in the books.  I even did a post on these book mashups and most of the commenters on that post said they have a copy of Pride and Prejudice and Zombies.  I was also thinking of which book I could pick up, and thinking that this book is the most popular one, I know a friend who has a copy and borrowed this and started reading.  The first few chapters are funny and interesting, but I think all of you have experienced having a conversation with your parents/friends/anyone else you know where they always bring up this silly incident which makes you laugh the first few times but then the joke gets old pretty soon and all you could say when they repeat it again is, "Yeah, I think you already told me that story..." but they still insist on telling you about it again?  That's what happened in this book.  I loved Pride and Prejudice so much and I understand that that book, as well as Austen's other books are really very powerful that the magic of their stories transcends time.  I also like zombies although not too much to go gaga over them but enough to give me a laugh when I read about them, and it was interesting to see Austen's storyline being invaded by zombies.  But mere insertions of a zombie fight or some such thing is not really that riveting to me, it was just like reading Pride and Prejudice all over again, but this time it's like my mind is warping some of the passages that makes reading about zombies not very amusing.
I thought the book would be giving different twists and quirks and maybe that's what disappointed me so much.  I suppose I could not expect any of the major characters to die or turn into a zombie, but something to that effect could have been better, could have at least made the book more fascinating on its own, than relying on Austen's power and just tossing in some undead beings.  For me, it doesn't really matter if you don't stay too faithful to the original book, the point here is to create a new story from an old book and a new concept right?   This book had a lot of promise, but the execution was poorly done.
Of course, Austen's prim and proper manner of writing is preserved, the voice solid and clear, the characters charming and relatable.  I loved the graphic illustrations and the realistic tone of dialogue but that's where it stops.  If the story itself had been written with more creativity and force, this book could have been better.  I could not picture myself  buying this book and keeping it on my shelf to re-read it over and over.  Good thing I did not get this on my own, otherwise, I would be really kicking myself in the head right now for wasting a lot of money on something as useless as this book.