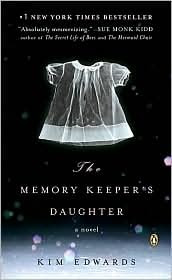 I hope you are well. I have read your book, The Memory Keeper's Daughter, and this letter was written to tell you what I think about it. You probably don't have much time to reply to letters to you, even read them, but I just wanted to get this off my chest.

I got a copy of your book because I was very intrigued by the premise of the plot: A young woman Norah, in the '60s, gave birth to twins with only her orthopedic surgeon husband, David, and Caroline, a nurse, to attend to her labor. The first child, a baby boy, was perfect and healthy; but the next child, a girl, was born with Down syndrome. David then made a hasty decision to ask Caroline to take the baby girl, Phoebe, to an institution. Caroline, however, decided to take care of Phoebe and disappeared. I liked what you wanted to do with the story, to show how one lie can insidiously destroy a family, the difficulties of having a child with Down syndrome in the 1960s, and a mother's pain in losing a child.

I was very intrigued that going through several pages, I had a false sense of excitement for this book, not noticing that the story was sort of imbalanced. You kept telling us about how David or Norah or Caroline feels, but never showing us how. I wanted to cry with Norah and with David, but I just can't because it felt like you were just telling me to cry, instead of showing me a reason to cry. It felt imbalanced when you kept telling me about how Caroline had to fight a lot to help Phoebe get a normal life, instead of showing me what those fights were. I can see that you are a good story teller, but I hope that in other books, you can prove that you are also good with story imaging.

As for the characters, I could not see much depth, except for Phoebe, which is probably because you decided that a girl with Down syndrome should be portrayed skillfully to become realistic - which shows that you do have talent for character creation, but you seem to become too engrossed with your storytelling than bother with the other characters. Somehow, it appears, that your sympathy for Phoebe's plight overshadowed your writing, that you felt you wanted to lash out on the other characters, especially David's family by making them appear unlikeable, stereotypical, and bland. There was no credibility in their characters, each of their actions and histories questionable: David's past should have made him more of a man instead of the coward you made him out to be; Norah's intentions when she agreed to marry David did not seem to be out of love, but more like she just married a man like him who could give her the stability she wanted. Paul, pining for how life would be like if his sister lived, felt like he's just reacting to whatever his parents did, not having his own personality.

But in spite of those flaws, I did enjoy your book and even felt as trapped as David in keeping those lies. But to say that I loved all of it would be a lie: for me, the first and last parts are the only good ones. The premise of the plot was unique and remarkable, but the plot itself, not very much. And as I got closer to the end, it did not bother me that much.

Please don't take this personally. I only wanted to comment on the story you wrote, and I hope this would help you in writing your next book. I look forward to another unique story from you, and when that time comes, I hope it will be way better than this one.