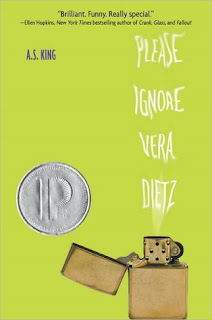 Summary from Goodreads:
"Vera's spent her whole life secretly in love with her best friend, Charlie Kahn. And over the years she's kept a lot of his secrets. Even after he betrayed her. Even after he ruined everything.

So when Charlie dies in dark circumstances, Vera knows a lot more than anyone—the kids at school, his family, even the police. But will she emerge to clear his name? Does she even want to?"

Please Ignore Vera Dietz by A.S. King had a very unique concept of story delivery.  Yes it's very common to have multiple characters talking about their sides of the story in one novel, but this one did more than that - it did not just have people giving their insights, but an inanimate object as well.   It was also able to convey this really poignant feel without being too depressing as the blurbs would have us believe.  It showed objectivity but it did not detach the reader from the emotional quality of the book.

...some parts felt dragging and too slow, often a bit too redundant.  I get it, Vera got screwed over by her best friend, but she still had to clear his name or she won't be able to live with herself.  Do I really want to read some slightly differed variations of this situation over and over before finally getting this issue resolved?  No, I already got the gist of it the first few times it was mentioned.

...at least I was able to enjoy Vera's dry wit and sarcasm and her father's labile behavior.  I poked fun at her dad's seemingly square personality and I was so angered at Jenny Flick's unbelievably nasty antics.

...I looked forward to reading about the book's resolution and whoah, imagine my surprise (and disappointment) that it got really fast-paced towards the end that although it was satisfying to see it end the way I liked it (not a spoiler, I do not necessarily always want a happy ending.  Again, NOT a spoiler), it just felt a bit hurried in the way that the original premise felt too slowed down.

...I liked reading Please Ignore Vera Dietz, it had some awesome potential.  Maybe if I read it a few more times I'd get what Ms. King wanted the readers to see in her story.  But for now, I'd say it's OK.

All opinions expressed in this book review are my own and not influenced by any party in any way.


'Til the next book!