ARGH! An Interview with Lord Arkus from the Book, My Sparkling Misfortune by Laura Lond

First of all, let me just assure you that no monsters and/or villains were harmed during this interview.
Next, I would just like all of you to know that it was ARGH who insisted in doing this interview with the famed villain Lord Arkus of My Sparkling Misfortune fame, therefore, should there have been traumatic incidences that occurred during the interview, I am in no way liable.
That said, I'm letting ARGH take the wheel now and I hope you like our beloved monster's first foray into journalism.  Enjoy!

Come on, Nina, don't you have any faith in me?  I know how to handle this, I keep telling you that.  Lord Arkus is not dangerous, and besides, all questions I ask him are screened by the ever-present author, Laura Lond, who assures me Lord Arkus cannot hunt me down.
So, hello dear readers!  I am ARGH.  But you already know that.  Well, I'm here to present to you the awesomest character interview in the history of character interviews because Lord Arkus, villain of all villains, the blackest of hearts, and the soulless of all soulless has graced this blog with his presence as he submits himself to an interview and promises not to hit me.
You don't happen to slay monsters, do you?
No, no need to worry. That’s heroic stuff, I don’t do that.
Can you tell us something about yourself that nobody knows?
But as soon as I tell you, everyone will know. So there’s no point.
So you're a villain, can you tell us how that feels?
It’s fun in many ways, you get to set your own rules. But if you are considering this path, I must warn you that villainy is a lonely profession. And you have to always watch your back.
Most villains have a history of how they became a villain.  Can you give us a background on how you came to be?
Well, I am not usually open to sharing personal things like that, in fact I guard my early history, but I suppose there’s no harm if your readers know -- after all, it’s not likely that they make their way into my realm and start talking. So I’ll reveal some of it. I had chosen this fine profession when, as a very young man, I had lost a close friend, and on top of that found myself accused of things I had not done. I figured it was not worth it to try to prove them all wrong -- and I enjoyed their fear of me. So I had embraced this path and proceeded to earn my reputation of a villain. 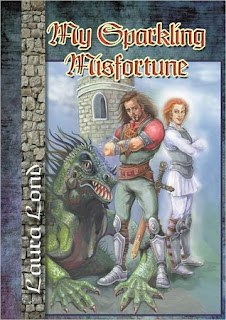 When did you decide to write your life story?  And what was your aim?
I thought it was about time a villain had his say. Have you noticed how villains are usually portrayed in books? More like props to move the story along rather than real characters. They are rarely heard or given a chance, they are often misrepresented and underestimated. The latter is fine with me, because when I turn out to be smarter than someone thought, I win. But the overall situation is, well, rather offensive. I thought a book like mine might help to set the record straight.
What are three things that make you most happy?
That would be getting even with enemies, getting even with enemies, and getting even with enemies.
What are books that you love to read?
I like adventure, preferably with sword fights. And of course a respectable villain in the story is always a plus.
I noticed that instead of your name, this book you wrote carries Laura Lond's name.  Do you know her?  And why not your name?
This is something I hope to straighten out someday. Ms. Lond helped to make my book available in your world; I had agreed to it since I did not know how to do it myself, but I had no idea she would put her name on it! If she was a man, I would have challenged her to a duel.
What can we expect from Lord Arkus in the future?  Any plans to conquer the United States?
Luckily for the United States, I reside in a different realm, so the answer is no. But you do have something to look forward to: I am working on a sequel to My Sparkling Misfortune. It will be titled My Royal Pain Quest.
Would you be interested in having a monster in your employ?  I'm not paid much for this book blogging job.
Can you roar and look scary? Those would be the primary qualifications. I do have goblins and other scary things in Arkusville, and there’s always room for more.
-----
Thank you so much, Lord Arkus for answering my questions, and for not hurting me! I enjoyed being in the presence of such villainy and greatness, I was really itching to join his army.  Unfortunately, though, I could not roar, and try as I might, I will never look scary.  What with my spongy body and overall cuteness, I am doomed to look cute forever.  So goodbye, badass monster dreams.  But I am glad that I finally have an awesome villain friend, they're so difficult to find these days.