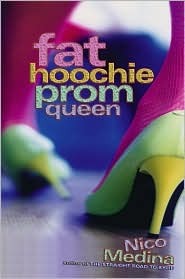 I was digging through a huge heap of books in the secondhand bookshop when I spotted this one.  Why did it catch my eye?  Well, because apart from its brightly-colored cover, the title was totally familiar.  Fat Hoochie Prom Queen was one of the books referenced in Dash and Lily's Book of Dares and at that time, I thought the title was just made up.  Imagine my surprise when it turned out to be real!  I gasped out loud when I saw this and did not let it go ever since.
The Gospel According to Goodreads

"What does it take to be the queen?

Margarita "Madge" Diaz is fat, foxy, and fabulous. She loves herself, and is adored by almost everyone else...except queen bee/student-body president Bridget Benson. These two girls have a history that's uglier than a drag queen after last call. During a heated argument, they decide there's only one way to end their rivalry: be named prom queen and the other backs off — for good.

Of course, everything looks different in the sober light of morning, but pride is at stake and the race is on. Madge is committed to doing whatever it takes to secure the title, but so is Bridget. And everyone's got something to hide.

I really thought this was just another shallow teen novel.  I was not really expecting much from it apart from the fact that I need to own it if only so I can bring up the title joke anytime.  But whoah, after a few clumsy attempts to connect with it at first, I was sucked in by the raging fabulosity that is Fat Hoochie Prom Queen!
The characters' voices stand out and sound very real that they jump right out at you.  It was almost like they were there with you the whole time, doing everything they did in the story and you were part of of the story.  Even Bridget Benson, the main antagonist, sounded very believable and human (reading about her, I can't help picturing Miley Cyrus as her).  Every character had a flaw but also had a lot of strengths.  Madge was big and proud of that fact.  She owned her body shape and used it to her advantage.  She's big, beautiful, and also had a big heart.  Lucas, her best friend, was as gay as gay could be and a really great friend to her.  They enjoyed the last of their high school year to the hilt and may I just say, their partying was almost at par with a lot of college parties I've known.  They took almost everything to the extreme, and some were a touch unrealistic but the author has written such an in-your-face story that it might even convince you that a cat is actually a dog that can't bark.


As for the writing, it's nothing like a high-end literary piece (what was that?), the story is very easy, light, and predictable - there's nothing new in the concept and after a few chapters I've guessed a bit of the ending.  The momentum in the beginning was almost frustratingly slow and I could not connect with it immediately - though when I finally did it blew me away - but it totally hits the spot.  I do believe that it's up there with the best in teenage novels about prom queens and fat, foxy young women.  There were a lot of parts that I thought was taken to the extreme, but it only added to the excitement of reading this book - some parts you know does not happen much in real life, but it thrills you to know that it MAY happen.


With regard to the ending though, I wished it had a better twist.  There was an interesting premise for what happens to the ending but sadly, it did not follow through.  And I also felt that it was a bit rushed - but it was still worth it.  Maybe the author thought that if he explored some of the twists further that it would not be too enjoyable for the readers because it would suddenly turn heavy and melodramatic.  Speaking of drama, this book did not just have it, this book was written because of it!  When you put up a story about a big hot girl, her gay best friend, and prom, you can never have too much drama.

Overall, for an entertaining book about friendship, partying, being fat and sexy at the same time, and of course the race for prom queen, grab a copy of this book.  Nico Medina is now one of my new favorite authors and I can't wait to read other books he has written.