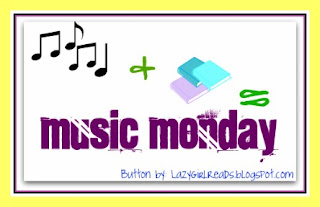 I have been telling myself to do this a thousand times before, and now I've finally done it!  Yay!!!  Thank you so much to Lah over there at Lazy Girl Reads for doing this feature where we showcase music that reminds us of a particular book that we read.
About the Book

I've just finished reading The Angel's Game by Carlos Ruiz Zafon and I still have a huge hangover from this one.  I'm still working on my book review for this one, but as I cannot stop from talking about this book, I hope a Music Monday post about this book would suffice.  This book is more along the lines of gothic fiction, mystery thriller, and magical realism with a dash of a tragic love story and what better music to describe such a mix than Lacrymosa by Evanescence?
About the Artist
Evanscence is an American rock band started in 1995 by lead vocalist Amy Lee and guitarist Ben Moody.  Current band  line-up consists of Amy Lee on lead vocals, piano, keyboard, and harp; Terry Balsamo on lead guitar; Tim McCord on bass guitar; Will "Science" Hunt on drums and programming; and Will Hunt on drums.  Their gothic-style music has appealed to listeners ever since, especially songs like My Immortal and Bring Me To Life, among other things.  In Lacrymosa, they used a sample of the 'Lacrimosa' section of Requiem by Mozart.  Which is awesome.  Visit their website for more awesomeness.