The Last Time I Saw Mother by Arlene J. Chai 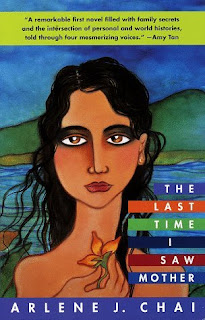 A conversation between a mother and her teenage daughter:

Mother: "Of course not. What made you think that?"

D: "Aunt Lucy said that I don't look like you or Dad."

M: "That's because you take after both of us. Our features are thoroughly mixed in you that if you smile, your lips spread thinly like mine, but when you're serious, your lips purse like Dad's."

D: "You're really sure I'm not adopted?"

M: "A hundred percent sure. Even a million. I gave birth to you, or have you forgotten that? Why are you thinking of those things anyway? Have you been watching too much telenovelas lately?"

D: "No. But I read a book, The Last Time I Saw Mother by Arlene J. Chai. Caridad learns that she was just adopted, and the circumstances surrounding her birth are told to her by three different women: her mother Thelma, her aunt Emma, and her cousin Ligaya, which also touches upon the history of their families before the Japanese occupation and then further afterward."

M: "And because of that, you thought you might be adopted? Was the book any good?"

D: "Well, in my opinion, the plot is interesting. I mean, it shows four sides of the story. However, although the author wanted to do four voices, to me it felt like their voices are one and they same."

D: "Ideally, it is very good, Mom, since the author wanted to touch on the lives of four women with the history of the Philippines as a backdrop. It's just that because the characters sounded the same, and they also sounded a bit uncertain with respect to their reflections on the past, the whole book became more like a narrative lesson in history, than a compelling story of family and relationships."

M: "I see. Well at least it made you learn a bit of history, which you're not very good in. But if you said that the characters almost sound the same, how were you able to distinguish them from each other?"

D: "Well the book is divided into four parts, each dedicated for a single character. And they also have a bit of distinction in the tone in that Thelma is resolute, Caridad is confused, then contemplative, then understanding, Emma is regretful, and Ligaya is bitter. But that's just the difference as far as this story goes."

M: "So from what you've told me, you didn't seem to have enjoyed the story."

D: "As I was telling you Mom, I enjoyed the premise. I just felt that it could have been written better. There was too much drama going on but I guess that's understandable, since the premise is intended to be dramatic. But the characters are too digressing in their personal stories, and quite frankly, it's reminiscent of typical Filipino telenovelas where a child is adopted early on and only learns of the truth when they are older, though this one does not have all the pathetic complications as those on television. And the ending could have been better, but I guess it would suffice."

M: "Well that explains your question about being adopted. You read something that is like a telenovela! You mean I gave you your allowance and you spent it on an unsatisfying book?"

D: "It was cheap Mom, so I didn't really lose that much."

M: "So what happened in the ending? Why were you not satisfied?"

D: "Why don't you just read the book, Mom? I can't stand here all day and talk to you about that book."

M: "And why can't you stay and talk to me? I told you you're not going out to that party."

D: "You're never this strict with my brother! Maybe I am adopted!"