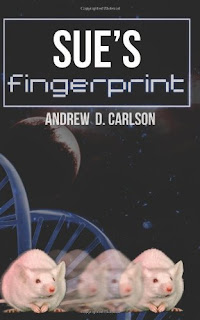 "A gel-like substance is suddenly discovered across the country. Ted Stevens, a Director in the Department of Homeland Security, is assigned to investigate. He enlists the help of scientists at a government laboratory to analyze the ‘goo’. They discover the substance was sent to Earth and has unique properties; it can clone animals. Ted soon learns the substance can also clone humans.

Sue is the first of eleven new people cloned from the alien substance. She and the others arrive without prior knowledges (and without clothes!). They are discovered and recovered by Ted and contained on an abandoned military base. While there, the clones learn about themselves and the world around them. They also receive a message. Sue decides she must deliver it, and one morning they find she’s gone.

During the recovery of Sue, Ted learns of the clones’ message and begins to understand their true intentions. He needs to know more about the clones, so he collects samples for DNA fingerprint testing. The fate of the new people will be decided by the results from Ted’s friends at the laboratory."
Review
Ever wondered what would happen if there were human clones?  Would they have the same knowledge as the cloned person?  Would they have the same natural life span?  Can they live a normal human life among other 'uncloned' humans?  In scientist - now also a writer - Andrew D. Carlson's Sue's Fingerprint, he not just talks about the scientific dilemma of cloning humans and the possibility of alien life forms, he gives an insight into identity, personality, and the individuality of a person - cloned or otherwise.
Sue and her friends were cloned from humans from a gel-like substance that was dropped off the Earth's atmosphere from space.  Their adventures (and misadventures) as they attempted to live like any normal person were very human-like it was funny and endearing.  The concept of the story was unique, yet the delivery was simple and concise.  Any reader (be it a sci-fi fan or not) would definitely get hooked after reading a few pages of this book, wanting more.  I found myself lost in the story as it unfolded with vivid descriptions and relatable characters.  I liked how it talked about science without putting me to sleep, which I really think is a serious challenge because really, complicated stuff like DNA and atoms and molecules either give you serious information overload or get you bored out of your mind.  In some books, when it comes to the parts where detailed lectures about some scientific phenomena happen I tend to just scan through them because I found them to be too exhausting and a wee bit boring.  That never happened while reading Sue's Fingerprint.  The development of the story was just too exciting for me to notice that I have already waded through some very complicated scientific matters, and the way it was presented, it was like it was your own idea to learn about those topics anyway.  I like that it gave me a good story and taught me something interesting at the same time.
Reading about Sue and the other clones gave me such a kick that I found myself occasionally laughing at their antics because most times I felt like I was reading about someone I know - myself, even.  They were, I guess, based on real human characters but Mr. Carlson found the twist to make them as unique as possible.  The imagery that his descriptions provided really helped in accepting each and every person in this book and although the scientific side got me a bit puzzled, I nonetheless felt comfortable reading such a story, and actually as I turned to the last pages, I was left hankering for more.  I really wanted a sequel for this book and find some new interesting twists and new geeky stuff to learn about.
Rating

If you have any questions on this particular rating, please refer to my ratings system here.
Notice
I received this book free of charge from the author, Andrew D. Carlson, in exchange for an honest and truthful review. This, in no way, affected my opinion or review of this book.